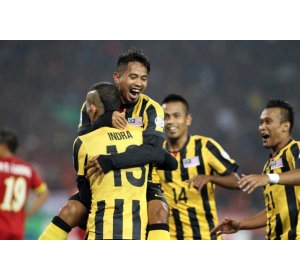 Malaysia is considered as one of the teams with the ideal and strong squad, so the supporters are waiting the next friendly games between Vietnam and Malaysia. Most of Malaysian players come from Malaysia super league and there are the brightest three players as top 3 of this team that any other teams have to prevent.

This player is known as a bright star in the squad of U23 Malaysia and he is competing for Pahang FA Club at Malaysia Super League Championship. Recently, this young football player has been just rewarded the title ‘The best player’ of football season. The father of Davies is an Australian, so that is reason why he has ever appeared in the squad of Australian U19 prior to making decision to become players of Malaysian U23 and national football team.

At 21 years old, this star become the youngest leader of the team and create a strong impression in the football history. With the outstanding records, Davies is a fully potential players of Malaysian national football team and becomes a big influencer in football. He has joined as a player for Malaysian 23 in SEA GAME 2015 and competed for the national team at AFF Suzuki Cup 2016.

This 20-year-old attacker attained many considerable records including the assistance U21 of Kelantan FA get the championship at Malaysia President’s Cup 2016 and the title ‘The highest scorer’ with 19 goals. After that, he also becomes one of the main players competing at Malaysia Super League 2017 with Kelantan FA. That is reason why this player cannot be absent from the squad of Malaysian U23.

Kogileswaran Raj’s father sent him to football academy of Royal Selangor Club since he was 6. Two years later Kogileswaran Raj’s, this boy showed his talent as scoring up to 28 goal at U10 Championship organized in the internal. In 2012, he along with U14 1MCC team got the championship of Youth Football Academy prior to playing for Palang FA since the last season.

The football style of Kogileswaran Raj is effected by his idol, Scholes from ball passing, ball controlling to the dynamic as playing at the middle line. In 2014, Kogileswaran Raj is one of three names winning the prize ‘the best player of the year’ at Asia football summer camping organized in Doha. This talent player has been playing for Pahang FA team at Malaysia Super League since the last year.

The above-mentioned players will be redoubtable components in the squad of Malaysia team in the next games. Besides, we also cannot forget some other prospect faces of Malaysia team like Kumaahran Sathasiam with the position of the attacker and Adam Nor Azlin with the postion of the winger. These players will be crucial key for Malaysian U23 to gain win in the next games. We will wait for their awesome performance on the grass.